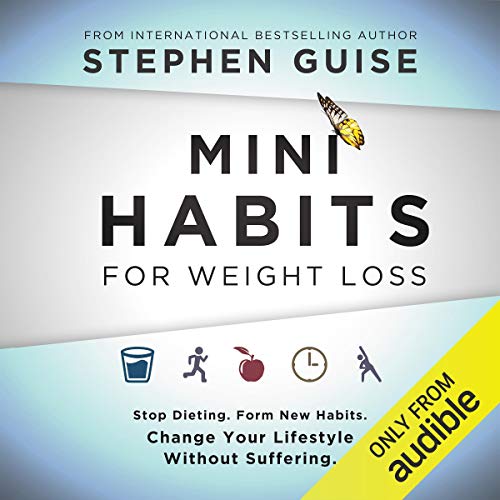 Say goodbye to calorie counting, restrictive food bans, or other forced behaviors. In Mini Habits for Weight Loss, you will learn how to lose weight naturally...

Say goodbye to calorie counting, restrictive food bans, or other forced behaviors. In Mini Habits for Weight Loss, you will learn how to lose weight naturally, in the precise way your body and brain are meant to change.

You will never diet again!

★★★★★ "I have to admit to having a tiny crush on your narrator Daniel Penz which is why I’ve been holding out for the audio book."

★★★★★ "This is not just another a dieting book. it does not have recipes. It does not tell you to eliminate this or that from your diet. None of that crap." 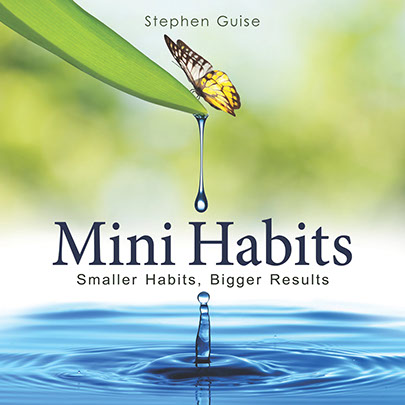 One afternoon--after another failed attempt to get motivated to exercise—
I (accidentally) started my first mini habit.

One afternoon--after another failed attempt to get motivated to exercise--I (accidentally) started my first mini habit. I initially committed to do one push-up, and it turned into a full workout. I was shocked. This "stupid idea" wasn't supposed to work.

I was shocked again when my success with this strategy continued for months (and to this day). I had to consider that maybe I wasn't the problem in those 10 years of mediocre results. Maybe it was my prior strategies that were ineffective, despite being oft-repeated as "the way to change" in countless books and blogs.

Lasting Change For Early Quitters, Burnouts, The Unmotivated, And Everyone Else Too

★★★★★ "This book gives you everything you need to start changing your life one habit at a time, one 'stupid small' at a time."

★★★★★ "...the narrator made this book really easy to get into and made me want to listen." 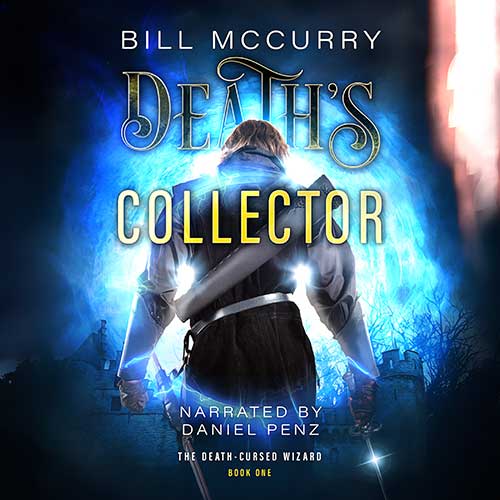 Cursed to take lives for the God of death. Sorcerers must give up things and
people they love or accept things they despise to gain magical power.

The sorcerer Bib saves his daughter by accepting a curse to murder people, and only Death knows how many Bib must kill. He tries to slay only evil people, but soon finds he's also killing people who are merely bad or who might someday become bad.

Bib chases a brutal sorcerer to help a woman rescue her boy, mainly because he expects a lot of killing. But he doesn't expect to unearth obscure magic, enslave spiteful supernatural beings, and strike ghastly bargains with the childish gods. And the last thing he expects is to face the question - is he a good man cursed to crave murder, or has he always been a murderer at heart?

★★★★★ “There is always a cost for using magic. Nowhere have I ever seen that more vividly illustrated, and in a new and different way.”

★★★★★ “This is a book of murder, violence, and self-exploration. A character study drenched in blood”

★★★★★ “This is a fun read with a protagonist that should not be someone you want to spend time with; but dammit if you don't enjoy having him around.” 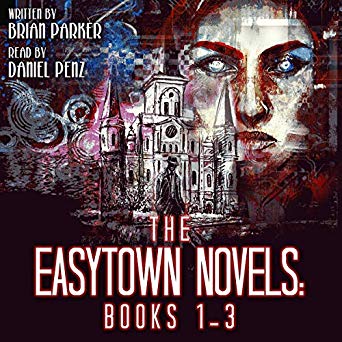 The Easytown Novels create a frighteningly real near future world beset by climate change, social depravity, moral ambiguity, and corporate greed. Easytown is city with a thousand stories and the hard-nosed homicide detective, Zach Forrest, is determined to learn them all.

Book 1 - The Immorality Clause:
Easytown’s robotic pleasure clubs are a serial killer’s playground. The futuristic slum in eastern New Orleans is a violent place where any vice can be satisfied - for a price. As long as the taxes are paid and tourists continue to flock to the city, businesses are allowed to operate as they see fit. When a string of grisly murders rocks the city, homicide detective Zach Forrest must hunt down the killer responsible before they strike again.

Book 2 - Tears of a Clone:
Torture tourism is an illegal sport in Easytown - unless the victim is a clone, then nobody cares. When Detective Forrest discovers the mutilated bodies of three clones in a garbage compactor, he’s shocked to learn of the multi-million dollar industry of torture tourism. He embarks on an unauthorized investigation and discovers that the truth behind the clone murders is more terrifying than he’d imagined.

Book 3 - West End Droids & East End Dames:
Everything comes crashing down on Forrest when a rampaging cyborg attacks, disrupting his investigation into the death of a lowly thumper club doorman who knew too much. Before he can determine his next move, a beautiful evidence clerk lands on his doorstep and forces her way into his life. Meanwhile, the precinct chief tasks him to track down and stop the street doctors who build the abominations. But, will doing so cost Zach more than he’d expected? 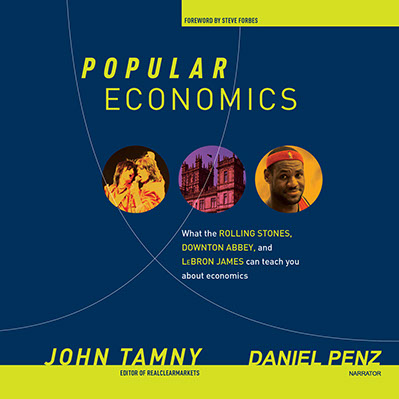 The Rolling Stones, the Dallas Cowboys, and Paris Hilton become examples of good and bad tax policy. The Godfather, Gone With the Wind, and The Sopranos reveal the downside of antitrust regulation, while the Michigan Wolverines’ 2007 loss to Appalachian State explains why regulations often fail to achieve their intended purpose.

NBA star LeBron James’ exploits on the basketball court illustrate free trade and comparative advantage, while the cooking of chicken wings makes the case for a stable dollar.

"...a highly readable attempt to convey a set of economic ideas that should belong to neither major political party."
—Philip Delves Broughton, The Wall Street Journal

"Nothing," Tamny demonstrates, "is easier to understand than economics. It is everywhere you look. Readers of his book will subsequently look at things differently."
— George F. Will, The Washington Post

"...uses exciting stories from the world around us to show the reader that nothing is easier than economic growth..."
— Arthur Laffer, creator of the "Laffer Curve"

"Rare is a book so contrary, so pithy, and so true."
— George Gilder, author of Knowledge & Power 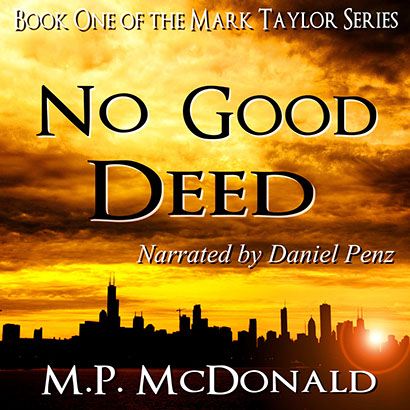 No Good Deed | By M.P. McDonald

Mark Taylor discovers first hand that no good deed goes unpunished when the
old camera he found during a freelance job in an Afghanistan bazaar...

Mark Taylor discovers first hand that no good deed goes unpunished when the old camera he found during a freelance job in an Afghanistan bazaar gives him more than great photos. It triggers dreams of disasters. Tragedies that happen exactly as he envisions them. He learns that not only can he see the future, he can change it. Then the unthinkable happened and everyone ignored his frantic warnings. Thousands die. Suddenly, the Feds are pounding on his door and the name they have for Taylor isn't urban hero. It's enemy combatant. And, it means they can do anything they want to him. Anything at all.

Mark Taylor is the quintessential reluctant hero. With a camera that snaps photos of the future, he has a day to change the photos--to prevent tragedies from happening. His attempts to prevent 9/11 bring him to the attention of the authorities, but they don't believe that he was trying to prevent the attacks. Instead, they label him an enemy combatant and lock him in the brig. With the camera gone--taken by the Feds--he must find a way to prove his innocence, but with no trial and no rights, will he ever get the chance?

"I cannot say enough about Mr. Penz's performance. He is a remarkably talented performer."
— Book of the Moment Club Review 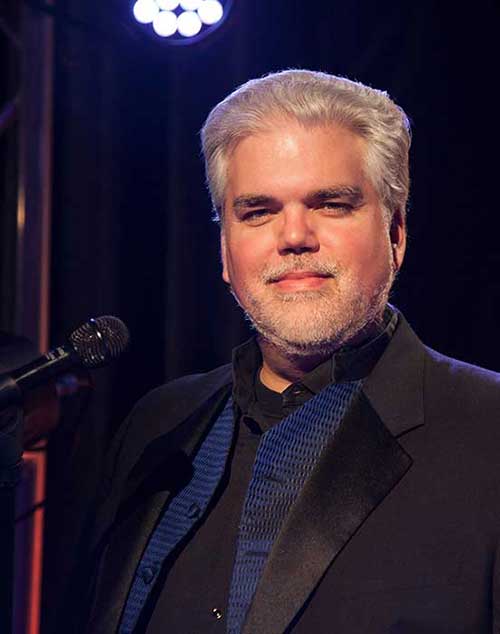